So. Legos. Keith has discovered Legos, in more ways than one. A few months ago he was over at his grandparents and, being the good grandparents they are, they unloaded all of Uncle Adam's legos out of the basement for Keith to play with. I wish I had the picture - their dining room was CARPETED in legos. And, of course, being the slightly obsessive child that he is, Keith convinced Grandpa that they had to sort out all of the 1,000,000 legos into the original sets. Fortunately, he inherited that obsessive gene from his grandparents, because they still had all of the original paperwork from all of those sets. I think there were approximately 100,000 sets. So they sorted. And sorted. And sorted. Keith wouldn't come home, because they were having so much fun sorting. Eh, whatever floats the kid's boat. Anyways, all that sorting started a love affair with legos. Now, instead of Cars, every time we're at the store we have to check out the Lego aisle. And Keith keeps his different lego creations out on random surfaces and calls them his 'set ups' and God forbid you move one of his set ups.

He also has the toddler sized legos - I think they're called Duplex? I can't remember - it's been a while since I've looked at them in the store. He plays with those, religiously, too. Usually in his room. So a couple of weeks ago, Duplex legos were strewn all over his room, and he was building things (with his IMAGINATION, mom!) and creating things and not picking up the spare lego parts. Fast forward to that evening. Ed gave Keith a bath, wrapped him up in a towel (arms included - this is important), and sent him off into his room to get dressed. Keith walks into his room, trips on the edge of his rug, and with his arms wrapped up had no way to catch himself. So he landed chin first on.... you guessed it....

Otherwise known as a damn expensive Lego. I hear all hell breaking loose upstairs and thought that Keith was just throwing a fit about having to get out of the bath. Then I hear Ed yelling "AMY! GET UP HERE!" and I run upstairs to see Keith hysterical and blood pouring out of his chin. So it was off to AI DuPont for stitches. 4 shots of lidocaine and 5 stitches later, Keith was mostly upset about missing his favorite cartoon. 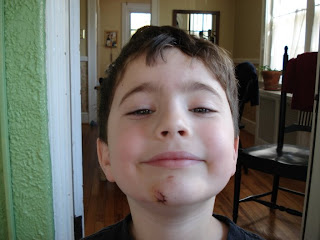 (And can someone explain the 'injured Keith pose'? Every injury picture I have of the boy is the same pose!)
Posted by Amy Mae at 10:04 AM