I've never needed the number for poison control before in my life, until this week. Of course, with Henry, you would think I'd be prepared and have it on speed dial. Well, now I do. On Thanksgiving morning we were getting some food ready to take to my mom's, and Henry was playing in the dining room. The room NEXT TO the kitchen. Approximately 5 feet away. Of course, it got too quiet. So I go to check on him, and he's pointing to his mouth with the look of "I don't like what I'm eating and I'm going to spit it out so you better stick a hand under my mouth pronto or it'll hit the floor." So, being the good mother I am, I stick my hand under his mouth. And he spits. And spits. And spits. But, there's no food. Then, I realize he's smelling awfully, I don't know, rosy. And I look on the window sill (the high ones, above the breakfast bar), and my little jar of fragrance oil with the sticks (I have no idea what the technical name would be) is not where it's supposed to be. Instead, there's a puddle on the breakfast bar, a dining room chair, and the floor. And I guess a puddle in Henry's mouth, which he's trying his damnedest to spit out. So I go and hit up google and get poison control's number, call them up, explain what happened and they say "Oh, he should be fine." Praise the Lord. I was NOT feeling an emergency room trip on a holiday.
So, fast forward to today. Everyone was up bright and early at 4am this morning (yes, THAT'S a whole other story), so at about 10am I put Henry down for a nap. He, apparently, had other ideas, and proceeded to find the little jar of Vicks Vaporub which was on his changing table (yes, *I* know that's a stupid place for it. Key word there *I*), open it, and eat it. And rub it in his hair. And in his eye. And then proceed to scream bloody murder. I'm thinking menthol stuff in the eye hurts. So I get him, notice the minty smell about him and the bright red eye and the greasy mouth. And go look up the number of poison control again. Apparently, eating Vicks Vaporub won't kill you (at least if it's less than a couple tablespoons), but rubbing it in your eye can seriously mess your eye up. So they told me to flush Henry's eye out with water for fifteen minutes (TWO YEAR OLD. SCARED OF RUNNING WATER. Fun, I tell you.) and then take him to the emergency room. So we do that, wait for a couple of hours to see a doctor, and Henry gets some dye in his eye to check for a chemical burn. Fortunately there was no sign of a chemical burn, but he looked pretty funny with his dyed eye. 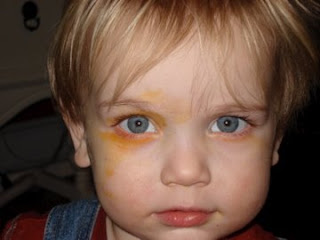 Isn't it funny how some kids can go through their entire childhood with not a single incident and others are on a first name basis with the hosptial.
It's a good thing he's so darn cute!

omg Amy, you poor thing! My mom used to not just rub vicks vapo rub on our chests, but she would try to get us to eat it!!! yes, like it was some sort of damn cure, she'd rub it on our nostrils when we had a cold, she loved that crap! She and my dad both used to sleep with it........their bedroom reeked of it!
Henry.........he is your one.........every parent gets one I think, one they adore, naturally, but that keeps them on their toes. Mine is Adrienne......god love her........I hope tomorrow will be better.