The Big Day(s) Part One

Well, we moved this past weekend! Yeah... that was fun. Really. I think I should preface this whole post by saying I HATE MOVING. I hate packing, I hate moving, I hate unpacking... pretty much anything that has to do with moving. I do like picking out paint colors though. That's about the only good thing about moving. Oh, and I got a bigger kitchen. That's nice. But anyways. The actual moving part sucks. So we got up bright and early on Saturday morning, ready to move. Ed had brought a truck home from work Friday night (no, not a tanker - a truck you can move crap in), so we were ready to go. Ed's friend Dave came over bright and early and they loaded most of the furniture into the truck. They even dumped all the stuff in the couch cushions for me! All over the flower beds! This picture doesn't really do that mess justice though. 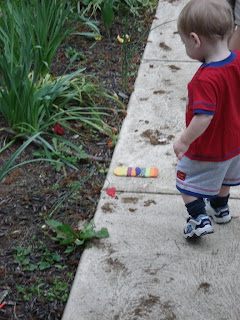 Can we say Sanford & Sons? That's what it looked like lol. 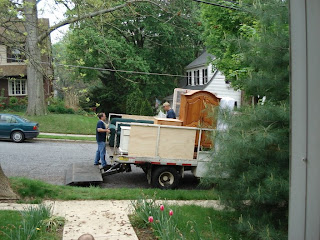 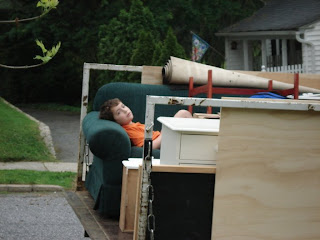 We got over to the new house around 10am. I was expecting Adam, who had spent most of the previous evening at the bar, to still be in bed, but SURPRISE, he was up and was wondering why we weren't there at 8am like I had told him. Um, Adam, I lie to you about what times things happen because you are ALWAYS late. By an hour at the least. That's why we weren't there at 8am - we were never going to BE there at 8am! It was all a lie! So we unloaded our stuff, and got Adam's stuff loaded. Packing isn't Adam's strong point -he seemed to miss the 'you need boxes to fill' rule of moving. But we got his stuff loaded and back to the old house. Lather, Rinse, Repeat. I think we made three trips to the new house with our stuff on Saturday. And during all three of those trips, all of the loading, unloading, packing, kids running around, all the chaos, the bunny just sat there. For the WHOLE day. Can we say rabies? 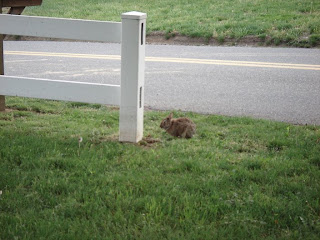 We moved the last few boxes late Saturday evening. I had Henry in his pajamas, ready to go, figuring he'd fall asleep before we hit route 1. Keith spent the night at Grandma & Grandpa's, so I didn't have to worry about TWO overtired little boys. I threw some open boxes in the back seat with Henry (really - I thought he'd pass out), drove the fifteen minutes to the new house, and opened the door to find a wide awake Henry who had found the open box of gallon ziplock bags. I think it was a big box of bags. 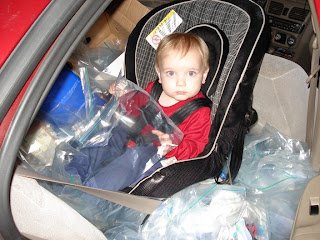 Come 10:30 Saturday night, I was EXHAUSTED (did I mention I'm pregnant? Really pregnant?!?), so we went up to our new room, flipped on the light switch, and nothing happened. Well, Ed's white shirt glowed like we were at a night club, but there was no light. You guessed it! Our bedroom came equipped with its very own black light!!! Now we could PARTY! So, being the old folk that we are, we went back downstairs to unearth a lamp out of all of the boxes etc. (read: crap). So we finally got to bed around 11pm.

Fast forward to 2:30am. You know how when you're in a new house, the tiniest noise wakes you up? Add in being pregnant, and really, a fly could have landed on my kitchen counter and I would have heard it. But no, it wasn't a fly. Instead I (only me - Edward was snoring away, oblivious to the world) wake up to hear someone trying to open the back door. Then they stop. Then I hear someone trying to open the front door. After I had a mild heart attack, I went downstairs (because Ed was, you know, SLEEPING) and find my brother standing in the hallway. Um, wrong house, dude. But no, Adam realized that he had left one VERY important item which he NEEDED at 2:30 in the morning at our house - his gallon of rum. Yeah. So he recovered the rum, and then started looking for an empty box. Why, you ask? He needed to save the bunny. Yup, the same bunny who was chilling by the mailbox all day - THAT bunny. That bunny was reminding me of the bunny in Monty Python at this point, and I was thinking Adam didn't want a box - he wanted a gun. But no, Adam had to save the bunny. At 2:30am.