Can you believe it? Here, in Philadelphia, the Phillies WON THE WORLD SERIES last night! It's been 28 years since the other time they won, and 25 years since any of our four sports teams won a championship. Maybe the Philly curse has been broken! I don't really know what else is going on in the world, since all the news talked about this morning was the new favorite team of Philadelphia, but does it matter? WE WON!!!! Maybe there really COULDN'T be a building in Philly taller than William Penn! (If you don't know what I'm talking about, read about it) 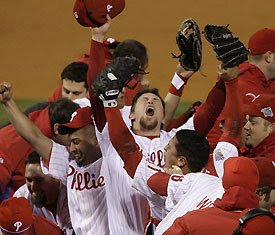