So we were packing the nonessential stuff in the kitchen this past weekend. In other words, we packed the cabinets that we haven't opened since we moved the stuff INTO them five years ago. Do you have ANY idea how many wine glasses we own? WAY TOO MANY. And this is me saying that, so you know it's a lot. Anyways, we packed (and got rid of) a boatload of wine glasses, and the 1.1 million coffee cups, and some other random stuff. As well as the tupperware cabinet. We got the tupperware cabinet empty, and a few minutes later heard Henry jabbering away and it sounded like he was in the kitchen. So Ed goes in there to get him, and he is nowhere to be found. He turns to go back to the living room, and hears Henry jabbering again. So he opens the tupperware cabinet. And finds this: 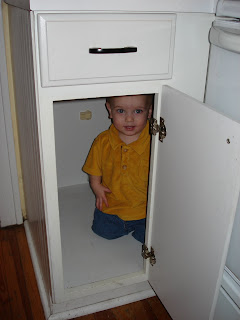