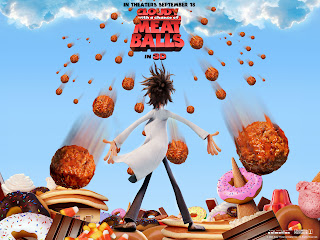 Or, as some people call it, Cloudy with a Chance of Meatballs. You know, the movie? It is Caroline's absolute FAVORITE movie in the whole wide world. We have Netflix and can used to be able to before someone (cough cough Henry) broke the Wii stream movies through the Wii. The most popular of which was, as Caroline calls it, Meatnalls. So after Henry broke the Wii, I decided to be the nice mom and got Caroline her very own Meatnalls DVD. You would have thought that I gave her a gold brick. Or a pink tutu. I made the mistake of giving her the DVD right before bedtime (well, ACTUALLY, Henry gave it to her. I was going to hold on to it until morning) and she flipped. All we heard for the next 20 minutes was "MEATNALLS! MEATNALLS! MEATNALL! FATCH MEATNALLS!" until Ed got her to bed. Of course, she had a death grip on Meatnalls so he had to tuck in her AND her movie. Fast forward to 3am. I wake up to Caroline staring at me holding Meatnalls. As soon as I opened my eyes it started - MEATNALLS! Fatch Meatnalls Mommy! GIVE ME A BREAK! So I threw her into bed with me, and Henry, and Ed (you know, the guy who was snoring through all of the Meatnalls?), and for the next 3 hours she tossed and turned and whispered "meatnalls... meatnalls... fatch meatnalls..." Finally at 6am Ed woke up and put Meatnalls on for his little princess.
Posted by Amy Mae at 8:52 AM