I said I'd post about Christmas, so I should probably get around to it! We had a nice holiday. We went to a friend's house for dinner on Christmas Eve, then to my parents house for Christmas morning, then Ed's mom's house for the early afternoon, then back to my parents house for dinner. Can we say BUSY? It was a nice day, though. The kids made out like little bandits and we happy with all of their new toys, my parents got a Wii for Christmas and we played that until Ed had to be a party pooper and make us go home, no one ended up in an emergency room... Successful Christmas in my opinion! My sister in law gave the boys this slime stuff that they both LOVED, until Henry decided he should put his in his hair. Fortunately Aunt Mary was there to help get it out. 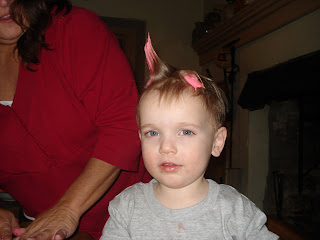 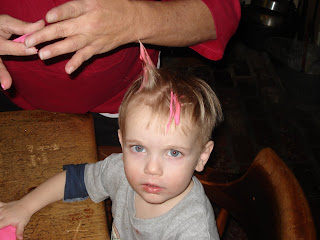 For New Years we went to a party at my friend Beth's house. We had a blast - wine, martinis, fireworks, you name it. The only bad thing was that ALL of the kids (and I do mean all) stayed up until we left around 2am, and then Henry promptly got up for the day at 7am. THAT didn't make for a happy Henry, let me tell you. So he went to bed around 3pm on the first and slept until 7am the next morning. And 3pm wasn't early enough in my opinion.
And, speaking of New Years, I don't do resolutions. I find that if I do, I always end up breaking them, usually before February. However, I was reading Carrie's blog, and I think I'm going to stick with the resolution of "swim in the water and not drown." Kind of covers everything, wouldn't you say? So, what about you? Resolutions? Yes or no??
Posted by Amy Mae at 1:31 PM