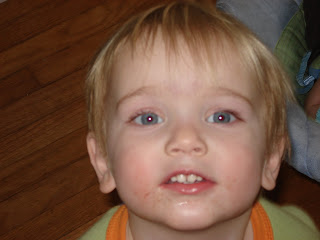 With the blond hair and blue eyes, he looks so much like a little angel, right? HA. Today, he proved to me that he is not an angel, but he is a genius. The boy has problem solving skills better than I did in high school. I had a mom's group at my house today, and I made cupcakes since it is Henry's birthday on Friday. Henry saw me making them at 9 this morning and insisted on having one. Being the oh so cruel mother I am, I refused. It's one of my mother's rules - no cupcakes in the morning - right after no apple pie for breakfast. So what did Henry do? He took matters into his own hands. He got his rocking chair from the living room, pushed it down the hallway and around the corner, and up to the counter in the kitchen. Climbed up on it, and helped himself. TO FOUR CUPCAKES!!!!! I was dealing with Caroline, so I didn't realize what he was doing until Keith went into the kitchen to get a drink and almost died. "MOM!!! Henry's making a MESS!!!" Fortunately, about half of the cupcakes were crumbled onto the floor, so he didn't actually EAT four cupcakes. He did, however, have a lot of energy today!
Posted by Amy Mae at 7:05 PM

Naughty little boy!
It's a good thing he is so cute huh?!
At least you know he goes for what he wants. Must get that from his Mama. ;-)

Anita - they are my mom's rules. The most famous one is no apple pie for breakfast - we still joke about it!