Did I spell that right? Anyways, Keith has decided (with a little help from his mother) that he has too many toys. So he cleared out his room, put a whole bunch of toys in boxes, and announced that he was going to sell them. And once he sold them, he would be rich and buy the Lego Death Star (retail value $399.95). I said "if you sell $400 worth of toys you can buy whatever you want." I'm wondering if those might just end up being famous last words. So last night, Keith was bugging Ed about wanting to go sell his toys. He wanted to have a yard sale, but impatience was getting the better of him. He finally wore Ed down enough who said "fine, go outside and sell your toys. Just stay in the driveway - I don't want you near the road." Henry went out with Keith, and Keith set up shop out towards the mailbox. Henry hung out on the steps waiting for Keith. Not five minutes later Keith yells "DAD! I got FIVE DOLLARS!!!" Ed goes out, makes sure he didn't sell Henry, and says "What? You sold something?" to which Keith replies "Yeah! Someone was walking buy and bought a toy for FIVE DOLLARS!"
So, apparently, you CAN sell toys out of a box in your driveway at 5pm on a Sunday. Who would have known. Now if he just sells $394.95 more, I'll be buying a Death Star. And I have a feeling he's going to want to spend every waking hour outside selling toys, now. 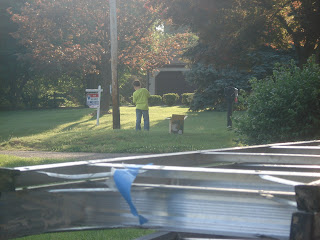 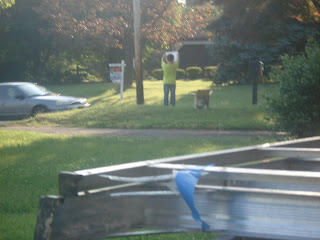 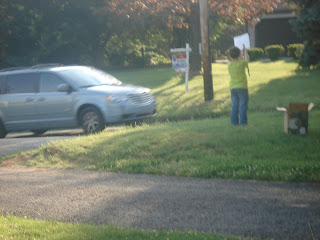