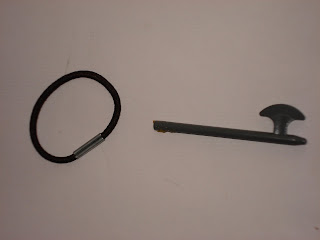 What's that? I know you're asking yourself that. Well, THAT is a lego ax for a little lego man. I took a picture of it next to my hair band to give you an idea of its size. It's pretty skinny. So. Henry. Wait, let me first remind you of Keith's experience with a lego. Ok, you remember that incident? Well, fortunately, this lego was cheaper. Mostly since we haven't gone to the doctor yet lol. Anyways, I was watching tv and Henry was playing in the foyer. I look over at him, and he's sticking that lego ax into his ear. Stick side first. I say "HENRY! Don't stick legos in...." and he goes WHAM and slams it into his ear. And then screams hysterically. I almost threw up lol - it really looked like it hurt!! Ed came running over and pulled it out - about an inch of the lego ax was in his ear. Fortunately it wasn't bleeding or draining any fluid or anything, so we'll be checking in with the pediatrician tomorrow morning. He keeps telling me "my ear hurt bad" and insisted on a band aid for it, but it seems okay. He's been complaining about the toenail he ripped off (unrelated incident) more. I'm pretty sure I see yet another gray hair.
Posted by Amy Mae at 8:25 PM