So, we decided to do a couple of roaster chickens on the barbecue today. Cut up some vegetables, shoved a can of ginger ale into the bird, and put the on the nifty chicken vegetable barbecue cooker trays we have. Stuck them on the barbecue, and went about out business. Keith was playing outside, and Ed kept checking on the birds. After they had been cooking about an hour or so (Ed had *just* checked on them) I happened to glance out the window and saw the barbecue, on fire, and Keith standing next to it waving the smoke away. Note to self: Keith didn't quite absorb all the fire training he's had. I yell for Ed, yell out the door for Keith to GET AWAY FROM THE BARBECUE, and go into the kitchen to get water. Did I mention it's a propane barbecue? Lucky it didn't turn into a rocket barbecue, seeing as we had just filled up the tank not too long ago. Ed runs out, pulls out the grease tray thingy with the tongs and dumps it on the grass (scorching the hell out of the grass in the process), and watches it burn. On the grass. While the barbecue also burns. Note to self: Ed didn't quite absorb all the fire training HE'S had. I grab some water, go out and dump it on the grease tray thingy and the fire goes out. However, the chickens are now pretty engulfed in flames. With the vegetables. Ed shuts the barbecue lid and fortunately after a moment or two the fire went out. Unfortunately, looking back on it, I didn't get any pictures, because they would have been funny! But I did get pictures of the aftermath!!
The grease trap - see the scorched grass? 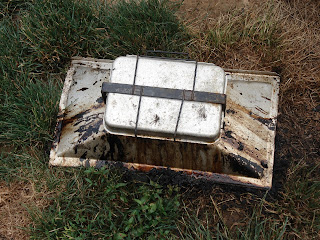 The barbecue, sans chicken and vegetables. 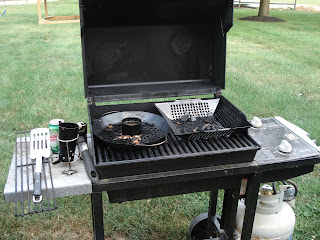 The grease tray and the barbecue. 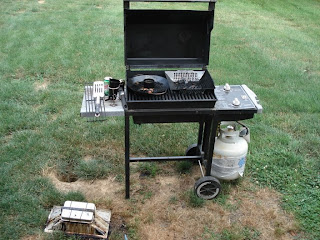 And my favorite picture, the vegetables. Ed was surprised that no one wanted to eat them! Here's a hint - they started out as potatoes, onions, and carrots. Yup. I swear. 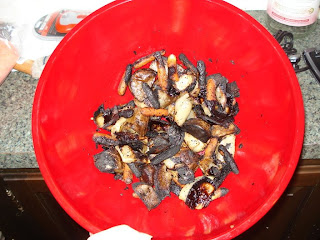