Last night we were running a little behind when it came to dinner. A guy came to inspect our chimney so we could use it, and he arrived around 5pm so dinner got pushed back a little. Oh, but our chimney is GREAT. Get this - we live in a relatively old house - maybe 80 years old or so - and the chimney HAS NEVER BEEN USED! Go figure! We're about to change that, though. So anyways, dinner. After the chimney guy left, we started on dinner. I was dealing with Caroline, and Keith was busy in the kitchen. I thought he was coloring, but instead he set the table! Complete with placemats, mugs, even got the silverware right! He was so proud - it was too cute. He told me I had to take a picture looking down on it because "that's how it is in magazines" - I have no idea what home decorating magazines he's been checking out, but I was happy to oblige. 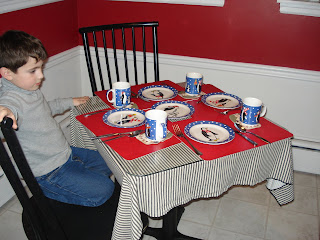 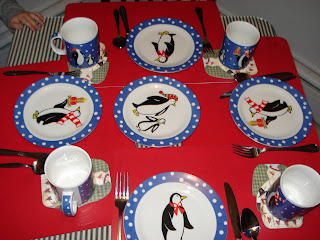 DANG! Can Keith be here tonight!? What a great boy he is, I'm totally impressed.

Is it okay if I covet your penguinware? :D