Last Sunday was the annual Kennett Square Christmas Parade and Tree Lighting. However, it was a MISERABLE day, so the good powers in charge rescheduled for last night. So I got the kids dressed, piled them in the van, and set out to Kennett. On one of the coldest nights this winter. We met Ed out there at Adam's house, and then walked up town to get a bite to eat before the big parade. While I was driving into town I was thinking that it didn't LOOK like they were going to have a parade. There were no signs, no road closures... While we walked to town from Adam's house, half an hour before the parade was supposed to START, I was REALLY thinking it wasn't looking like there was going to be a parade. So I called my mom, who said to call one of her friends who was a local merchant. Instead we ran into someone who used to work with my dad, and she said there was no parade. Santa and tree lighting, yes, but parade, no. Oh well. It was cold, and the kids (read: Keith) just wanted to see Santa. So we went and grabbed some dinner, and got back to the town Christmas tree about 2 minutes after they lit it. Oh well, the kids (Keith) really just wanted to see Santa. Screw the festivities. Besides, as anyone in Kennett knows, the best part about tree lighting is seeing what happens when they try to light the tree. Will nothing work? Will only half of the tree light? Will it fall over? Will it spontaneously combust? And this year, it lit. On the first try. COME ON PEOPLE!! Kennett has a TRADITION! Don't ruin it!!! So we hightailed it to where Santa was going to be. The rule in Kennett is as soon as the tree is lit/parade is over you should run like hell to see Santa so you're one of the first in line. And we were! Well, in the top twenty. So we got all of the coats off, bribed Henry to sit on the big man's lap (I promised him a candy cane), gave Mrs. Claus Caroline, and got the family picture. 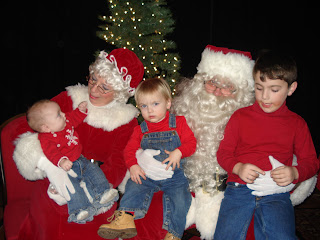 It is REALLY difficult to get three kids on Santa's lap to all look at the camera at the same time to take a picture. ESPECIALLY when one is 3 months old, one is two and only wants his candy cane, and one is six and has a grocery list of toys he has to ask for in less than a minute. REALLY hard. 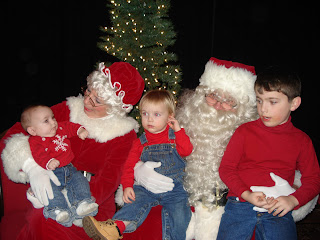 I have NO idea how Heather got all six of her munchkins to look so cute. I swear, she's supermom. But, I got a pretty good picture, considering. And I got the one that I have of both of the boys of Caroline... 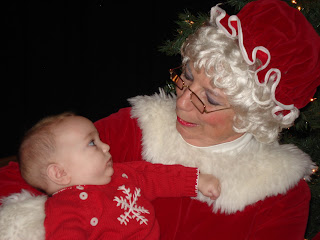 So Keith got to tell Santa everything he wanted in 30 seconds or less, Henry got his candy cane (which he ate half of, and then tried to give to dad. Unfortunately, not HIS dad. Just a random dad he found.), and Caroline got, well, to be held. Which is all a 3 month old really wants for Christmas, anyways.
Posted by Amy Mae at 8:00 AM

Love the pictures Amy, and the commentary! You have great wit!